A long, pale-haired Heaven Blade Wielder, who is tall and slender and has dark complexion. She has a thirst for the battlefield and is exceptional with her attack wielding skills and weapon, focusing solely on attacking and completely disregarding all defence. Her weapon of choice is shown to be something of a pole-bladed halberd, similar to a Guan Dao.

In the novel, she is the companion of Heaven's Blade Receiver Reverse, who would call her "Tia". When paired with his ultimate defence, they form a formidable duo. She is not from Grendan. She usually has no problems holding conversations with women. On the other hand, except for Reverse, she displays an indifferent attitude when communicating with other men.

In the first episode, she reprimands another Heaven's Blade wielder for giving Layfon weak advice. She states that the only thing you need to do with Pollutant Beasts is dash in and slash them, apparently finding a battle with them easily. Queen Alsheyra responds with even higher standards for Layfon. She didn't want Layfon to be the only one to show off in the filth monster battle. 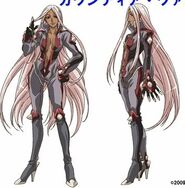 Cauntia
Add a photo to this gallery

Retrieved from "https://csr.fandom.com/wiki/Cauntia_Valmon_Farnes?oldid=6942"
Community content is available under CC-BY-SA unless otherwise noted.