Felli Loss is a character of Chrome Shelled Regios (Novel) and its anime adaptation. As a previous member of the 17th Platoon, Felli is in charge of Reconnaissance. She is currently accompanying Layfon with his journey.

Felli has knee-length, silver hair and silver eyes. She wears the traditional white and blue Military Arts' uniform top, cream shirt and red tie, with a short white skirt with frills. She pairs this with high, white socks and white boots. In action she wears 17th platoon black combat uniform.

At the final volume after many year  passed,her overall appearance didn't change at all as she attained his youthful appearance,which she sarcastically said to Nina that she and Layfon had attain the immortality which makes Nina to be annoyed on her.

Due to being a Nen-I operator, Felli receives a great influx of information in her brain, and her mind is unable to handle the strain of responding to every bit of information. Because of this, she has a hard time making common facial expressions, such as smiling, and showing affection though she can get really angry easily which she demonstrate by kicking the one who anger her a very strong kick that can break the leg, or shout very loudly. She also can feel jealousy as she was jealous when she saw that Nina brought flowers to a hospitalized Layfon and kept the flowers she brought, other examples are her jealousy of Nina's developed figure and her jealousy of Mayshen getting close of Layfon.

Feli doesn't like being in the military arts, that she was forced into it by her brother, whom she resent for this, just because she is a Nen-I operator and want to decide her own future which was shown by her trying to take a part time job, but was tricked into working as maid in cafe by Sharnid Elipton. Feli dislikes fighting and doesn't want to use her power, which she also dislikes, in a way.

As the series progress Feli starts to be more opened showing more emotion like worry and even the will to fight, which she didn't like, in order to protect the city and help Layfon whom she developed feelings for. She also starts to stand up for her decisions as she forced her brother to let her go with her team .Her feelings for him are shown to be strong to the point that she decided to go with him when he decide to to leave the city to pursue his journey.

Feli personality in Chrome Shell Regios: Missing Mail manga is different, however, She is more opened and doesn't express her anger by kicking others or something. She is more open, she have no problem with Layfon seeing her smile and tried to advice him when he was confused and didn't know what to do.

Felli is the Nen-I user of the 17th platoon and a 2nd year. She comes from Santo Brug, a city of trade. She rarely speaks and shows little emotion.

Her brother is the head of the student council in Zuellni, Karian Loss. Felli is a gifted Nen-I user and because of that she was forced into Military Arts by her brother and thus despises him for it. Felli's power is extremely strong and she always tries to hide that fact. Felli kicks someone or something every time she's angry.

She works part time at a cafe, which Sharnid Elipton recommended, where the waitresses dress up as maids. She is shown not having culinary skills. She kicks Layfon Wolfstein Alseif in the leg every time he does something wrong and will also hit her brother whenever he's being too noisy. After learning of Layfon's nickname Lay-ton (Lay-fie in English dub version), she insisted on calling him Fon-Fon. She also has taken a liking to Layfon in a romantic sense, showing clear signs of jealousy by copying Shante Laite's little act by riding on Layfon's shoulders and blushing while Layfon teaches her how to swim. When she discovers Leerin Marfes' letter, she shows slight jealousy and attempted to press the matter but was to reluctant in the end. Additionally, after Layfon is hospitalized, Felli comes with flowers. She ends up keeping them because she spots flowers already delivered by Nina Antalk, making Felli react in a childish and jealous manner.

Felli is described as one of the most talented Nen-I operators. Her DITE is a wand which holds many petal shaped pieces that are grey when inactive and are pink when active. These petals are utilized to send out telepathic messages to others. They can also transform into offensive daggers, if necessary. Felli is also capable of synchronizing with other people's pins to make up for distances she cannot cover. She, like Layfon, dislikes fighting and almost never tries when it comes to combat. However, when the order was given to retrieve Nina before the Kei-Ra Cannon fired again, her brother wanted her to stay. In contrast to her past actions, Felli nearly attacked her brother to force him to let her go. With the display of her newly-found will to protect the city, Felli showed that she had grown after meeting Layfon.

At one time, Felli cooperated with Sharnid's father, Elrad, in the dealing with a filth monster.

From the beginning, Felli has felt a sort of kinship to Layfon as both were forced to join the military arts department by her brother Kalian. Layfon is also one of the few that has seen Felli smile, though she did drive her heel into his shin for seeing it. As the series progresses, Felli develops a rather obvious crush on Layfon, to the point of making excuses during swimming lesson simply so she can continue to hold his hand. Layfon himself shows Felli the utmost respect, both as his senior at the academy and as his friend. Despite the rather significant amount of time the two spend together, Layfon remains oblivious to her feelings for him. However, these feelings never seem to stop her from punching or kicking him when he does or says something stupid.

When Layfon didn't return for about, one and half years after his battle to help Glendan, she became quite lonely and bored to the point that she was letting her Psychokinetic flakes scatter all outside and inside the city all day in hopes that she would get some kind of update on Layfon's return. When Layfon's return to the city happened;during the confrontation, she released all her feelings on him but she did not let herself come to crying in front him as she walked next to Layfon which made Layfon wonder why she acted like she did. When Layfon confessed his feelings as well as invitesd her to come with him on his journey, she quickly accepted it with an emotional "yes" , during this time she wasn't able to hold her feelings inside which she had kept inside for a very long time and she rushed into Layfon's chest and cried because she was able to release all of her stress.

Kalian is Felli's older brother and president of the student council. Felli holds great disdain towards her brother because he forced her into the military arts rather than allowing her to find her own path in life. As such, Kalian is one of the most frequent victims of Felli's abuse, once kicking him with such force that she snapped his leg bone. Despite her cold and abusive treatment towards him, Kalian does show genuine affection for Felli, albeit in his own strange way. He even abducted Layfon during their trip to the spa and threatened him when he thought he was trying to make a move on Felli.

Nina is easily Felli's closest friend and vice versa. The girls are rather close to one another and often act like sisters more than a squad leader and her subordinate. Nina shows great concern for Felli when she was attacked in episode 4, and relief upon seeing her unharmed. Felli also does not seem to mind physical contact with Nina, making no attempt to resist when the latter hugged her and examined her for wounds, though the sudden embrace did seem to surprise Felli somewhat. Nina is also one of the few people who gets to see Felli smile, as she makes no attempt to hide it when with Nina as seen during their trip to the spa. Their closeness does not stop them from arguing over who gets to help Layfon and Mayshen cook, though this came off more as a playful spat than an actual argument. However, Felli does get jealous of Nina's closeness with Layfon from time to time, and seems genuinely hurt that Nina refused to say where she had been after her sudden disappearance and return to Zuelni, though this could have been jealousy that Nina's presence was able to cheer up Layfon when she could not.When she show that Nina was get older she teased her to find a successor who continue her legacy which makes latter's annoyance.

Felli and Shante dislike each other a great deal. Felli seems to enjoy tricking Shante into hurting herself and often refers to her as a monkey, much to Shante's annoyance. 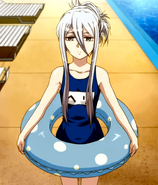 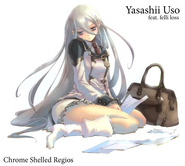 Felli's One and Only smile

Add a photo to this gallery

Retrieved from "https://csr.fandom.com/wiki/Felli_Loss?oldid=7487"
Community content is available under CC-BY-SA unless otherwise noted.